​Born and raised in Cleveland, Ohio, Roger graduated from Concordia Lutheran University Chicago with a BA in Elementary Education and a Director of Christian Education (DCE) Certification.  Along with his parents, many wonderful Lutheran Teachers and Pastors helped influence his faith and life.  Roger served at Christ Lutheran (Milford, MI) and Epiphany Lutheran (Kenmore, WA), and worked in retail management with the Bartell Drug Company.  In April 2005, Roger joined the staff of First Lutheran Bothell, after being a member here since 1998.

Roger has two adult children and two grandchildren.  He enjoys cooking, traveling, and working around his house on "projects.”

Lucy Kay Osborne began playing organ for worship at age 14 at her home church, Maple Leaf Lutheran in Seattle.  Lucy Kay received a B.M. in organ performance and a B. A. in music education (vocal), K-12 at PLU. During her time at PLU, she spent a summer in Holland studying and playing historical organs. In 1990 she received a M.Ed. From Seattle Pacific University.
Lucy Kay taught general music and choir, grades K-6 for 36 years.  She has been organist and directed children’s choirs and adult choirs at several area Lutheran churches.  She taught music education classes for many summers at Seattle Pacific University.
Lucy Kay is thrilled to be on the staff at FLCB!

Richard Edmonds directs the Ensemble, a group of talented vocalists and instrumentalists who lead the worship music at the 11:00 blended service.  He studied at St. Olaf College, the University of Washington, and Luther Seminary.  After receiving his Master of Divinity degree, he was ordained at First Lutheran in 1969 and went on to serve several parishes in Washington state, including Ebenezer Lutheran in Lake Stevens.  After retirement, Richard and his wife Judy returned to First Lutheran in 2005 where he joined the staff on a part-time basis, planning the worship music for the 11:00 service and leading the Ensemble. 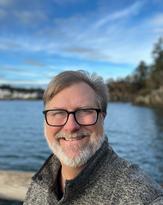 ​   A lifelong resident of Washington State, Pastor Berg has lived in Redmond, Lake Stevens, Pullman and now Kenmore. After graduating from Eastern Washington University and a short stint with a printing company he attended and graduated from Luther Seminary in St. Paul, Minnesota. With his wife Susan they have two adult children Micah and Hannah.
Pastor Berg has served Ebenezer (Lake Stevens) and Trinity (Pullman) Lutheran Churches before accepting the call to serve FLC in 2010. His love of teaching and preaching fuel the ministries of FLC. The core of his theology is wrapped around the ideas that God is in the ordinary and that we are all called to serve in the very ordinary places of our lives.
Pastor Berg is always available for conversation, just make an appointment!​

Kristin's accounting background prepared her for being the bookkeeper and office administrator at First Lutheran. Besides balancing the books and keeping things running smoothly at the office, Kris enjoys interacting with members and visitors in an informed way during the week. "The door is always open", she says with her trademark smile.

Kristin and her husband, Ken have 3 adult children, 3 grandchildren and are longtime members and active volunteers at First Lutheran Church.

Up until 1923, services were conducted in Norwegian. In 1924 the congregation voted to speak English, and in 1929 the congregation ratified the motion to accept First Lutheran Church​ as our official name.

For the first 25 years, pastors not only preached, but they often served as Sunday school teachers and led different youth and women's groups. Today we have a full time pastor, a Youth Discipleship Ministries Director, a Music Ministry Program, two office staff, and many volunteers that continue our congregation's work for Christ.

Currently, we adapt many of our organizations and activities to changing lifestyles, but we continue to share the traditional faith and beliefs of early pioneers. As Ambassadors for Christ we pray that we may intensify that faith and loving service for generations to come.